This post is by Ashok Kumar, assistant vice president of technology for LTE Advanced carrier aggregation technology at Aricent.

In practice, some features of any new upcoming technology always get deployed much ahead of the other features, and in my opinion, carrier aggregation is going to be one such feature of LTE Advanced. The rationale behind this is that the demand for data is increasing fast and the realisation of this feature is cost effective. This is because only software upgrade is required on the network side and new user equipment devices supporting this feature.

Now, some of you may be wondering what exactly carrier aggregation is but simply put, CA is a mechanism to increase channel bandwidth, or in other words, achieve higher data rates than standard LTE, as shown in Figure 1 below. 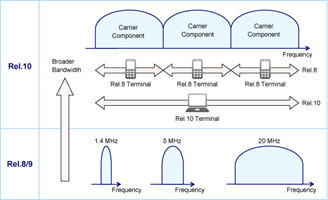 LTE as a technology supports up to 20MHz channel bandwidth, but with CA, the same can be enhanced to 100MHz as five such channels (called component carriers), up to 20 MHz each, can be combined.

To achieve this, CA introduces the concepts of Primary cell (PCell) and Secondary cells (SCell). The CA-capable UE selects a PCell, just like a non-CA capable UE, making this feature fully backward compatible. The SCells are allocated to the CA-capable UE by the RRC layer, after due evaluation that these cells can also serve that particular UE. The activation/deactivation of these SCells is controlled by the MAC layer. The SCells may operate on the same frequency band as the PCell, or on a different Band. There are no changes made to the RLC and PDCP layers, except for the support of larger buffer sizes.

There are three new user equipment (UE) categories (6-8), defined in LTE Advanced, which indicate the support of CA by the UE, while previous UE categories, from 2-5, may also support CA. In LTE Release 10 specifications, the UE only has support for two serving cells (1 PCell + 1 SCell ) operating in the same band . Later LTE Releases add the support for more serving cells.

Aricent will be at available to meet at Booth 1 of the LTE Asia conference, taking place on the 18th-19th September 2013 at the Suntec, Singapore. Click here to download a brochure for the event.

Interview: Member, board of directors, Chunghwa Telecom & SVP, NCTU, Taiwan: “As the leading telecommunications operator in Taiwan, we are well prepared to develop LTE commercial services.”